By Stephen B. Schott 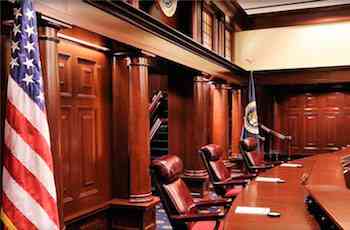 “release means for retaining the guide in the charged position.”

A court interpreting such a claim follows 35 USC 112(f) above and first identifies the claimed function and then looks to the patent specification for the structure that performs this function. From the patent owner’s perspective, this method of claim interpretation is potentially problematic for two reasons: (1) If the specification fails to show a corresponding structure, a court will consider that the means plus function term is indefinite and the claim is invalid, or (2) The structure in the specification often provides a narrower interpretation of a claim element than the patent owner would want.
Thus in the US, many patent drafters try to avoid means plus function claims. Dennis Crouch at Patently O has charted an ongoing decline in the number of claims that use means plus function language (and interestingly the number of patents using language that is functional but lacks the magic “means” word has increased.)
Unclear Claims May Be Interpreted as Means Plus Function Claims
The Federal Circuit’s en banc Richard A. Williamson v. Citrix Online, LLC opinion may make it a little more challenging to avoid interpretation under the means plus function statute.
In the claim at issue, the element that the Federal Circuit scrutinized to determine if it was written in means plus form was this:

If the claim had been written as a “distributed learning control means for receiving…” its interpretation as a means plus function would be clear. But because the claim used the word “module,” the issue arose as to whether the court should apply 35 USC 112(f).

The standard is whether the words of the claim are understood by persons of ordinary skill in the art to have a sufficiently definite meaning as the name for structure. Greenberg, 91 F.3d at 1583. When a claim term lacks the word “means,” the presumption can be overcome and § 112, para. 6 will apply if the challenger demonstrates that the claim term fails to “recite sufficiently definite structure” or else recites “function without reciting sufficient structure for performing that function.” Watts, 232 F.3d at 880. The converse presumption remains unaffected: “use of the word ‘means’ creates a presumption that § 112, ¶ 6 applies.” Personalized Media, 161 F.3d at 703.

The court found that the limitation was subject to interpretation as a means-plus-function limitation. As noted above, these means-plus-function limitations require disclosure in the patent specification of adequate “corresponding structure” to perform the claimed function. The court found that the specification failed to disclose this structure and held the patent invalid.
The takeaway is that if a claim drafter wants to avoid the means plus function claim interpretation rules, they should draft claims that steer further from any linguistic construction that is similar to the traditional means plus function language.
If you have questions, contact me.
If you want IdeaEsq delivered to your inbox, sign up for the daily or monthly newsletter.